As he wrote in the piece, NIF's theory of change hinges on strategic, impactful investment in civil society organisations.

Through that funding – over the last 40 years, more than half a billion dollars from NIF donors from around the world – we can realise our vision of an equal, just and democratic future for all.

The BDS movement – and particularly a cultural boycott aimed at the most ardent critics of Israeli government policies which perpetuate inequality and occupation – is counterproductive in achieving our shared aims.

This is why NIF opposes the global BDS movement and won't fund any organisation which supports BDS.

Our executive director @liamget with this op-ed on @sydney_festival, Israel-Palestine & BDS in the Sydney Morning Herald 👇 https://t.co/NrvZVjGCjY 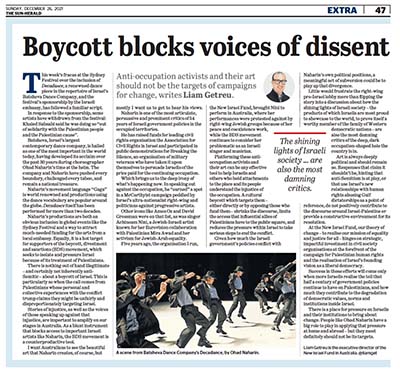 This week’s fracas at the Sydney Festival over the inclusion of Decadance, a renowned dance piece in the repertoire of Israel’s Batsheva Dance Company, and the festival’s sponsorship by the Israeli embassy, has followed a familiar script.

In response to the sponsorship, some artists have now withdrawn from the festival, with Khaled Sabsabi saying he was doing so “out of solidarity with the Palestinian people and the Palestinian cause”.

Israel’s largest contemporary dance company, Batsheva is hailed as one of the most important in the world today, having developed its acclaim over the last 30 years during choreographer Ohad Naharin’s time at the helm. During these decades, the company and Naharin himself have pushed every boundary, challenged every taboo, and remain a national treasure.

Naharin’s movement language “Gaga” is world renowned and productions using the dance vocabulary are popular around the globe. Decadance itself has been performed for more than two decades.

As one of Israel’s most well regarded cultural exports, Naharin’s productions are both an obvious inclusion in global events like the Sydney Festival and a way to attract much needed funding for the arts from a local embassy. Equally, it is a hot target for supporters of the boycott, divestment and sanctions (BDS) movement which seeks to isolate and pressure the state of Israel because of its treatment of Palestinians.

There is nothing out of hand illegitimate – and certainly not inherently antisemitic – about a boycott of Israel. This is particularly so when the call comes from Palestinians themselves whose personal and collective experiences with the conflict trump claims they might be unfairly and disproportionately targeting Israel for opprobrium.

Stories of injustice, as well as the voices of those speaking up against that injustice, are extremely important to amplify on our stages here in Australia. As a blunt instrument which blocks access to important Israeli artists like Naharin, the BDS movement is a counterproductive tool.

I want Australians to see the beautiful art that Naharin creates, of course, but mostly I want us to get to hear his views.

Like countless other Israeli artists, Naharin is one of the most articulate, persuasive and prominent critics of 54 years of Israeli government policies in the occupied territories.

He has raised funds for leading civil rights organisation the Association for Civil Rights in Israel and participated in public demonstrations for Breaking the Silence, an organisation of military veterans who have taken it upon themselves to persuade Israelis of the price paid for the continuing occupation.

Which brings us to the deep irony of what’s happening now. In speaking out against the occupation he “earned” a spot in a despicable McCarthyist campaign peddled by Israel’s ultra-nationalist right-wing and politicians against progressive artists.

Other Israeli icons like Amos Oz and David Grossman were on that list, as was singer Achinoam Nini, a Jewish-Israeli artist known for her stirring Eurovision collaboration with Palestinian Mira Awad and her broader activism for Jewish-Arab equality.

Five years ago, the organisation I run, the New Israel Fund (NIF), brought Nini to perform in Australia where her performances were protested by right-wing Jewish groups because of her peace and coexistence work, while the BDS movement continues to consider her problematic as an Israeli singer and musician.

Platforming these anti-occupation activists and their art can be a very effective tool to help Israelis and others around the world who hold attachments to the place and its people understand the injustice of the occupation.

A cultural boycott which targets them – either directly or by opposing those who fund them – shrinks the discourse, limits the access that influential allies of Palestinians have to the public square, and reduces the pressure within Israel to take serious steps to end the conflict.

Given how much the Israeli government’s policies conflict with Naharin’s own political positions, a meaningful act of subversion could be to play up that divergence.

Little would frustrate the right-wing pro-Israel lobby more than flipping the story into a discussion about how the shining lights of Israeli society – the products of which Israelis are most proud to showcase to the world, to prove itself a worthy member of the family of Western democratic nations – are also the most damning critics of the deep, dark occupation-shaped hole the country is in.

Art is always deeply political and should remain so. Responses which claim it shouldn’t be, hinting that antisemitism is at play, or which use Israel’s new relationships with human rights abusing Gulf dictatorships as a point of reference, do not positively contribute to the discourse around Israel-Palestine or provide a constructive environment for its resolution.

At the New Israel Fund our theory of change – to realise our mission of equality and justice for all – hinges on strategic, impactful investment in civil society organisations at the forefront of the campaign for Palestinian human rights and the realisation of Israel’s founding vision as a liberal democracy.

Success in those efforts will only come when more Israelis realise the toll that half a century of government policies continue to have on Palestinians, and how much they contribute to the degradation of democratic values, norms and institutions inside Israel.

There is a place for pressure on Israelis and their institutions to bring about change. People like Ohad Naharin have a big role to play in applying that pressure at home and abroad – but they most definitely should not be its targets.