Amos Oz in the Jewish News: Breaking the silence – a Jewish tradition

Amos Oz, the acclaimed author and moral voice of Israel, has written an incredible essay in this week's Australian Jewish News about the importance of standing up for human rights, justice and equality. 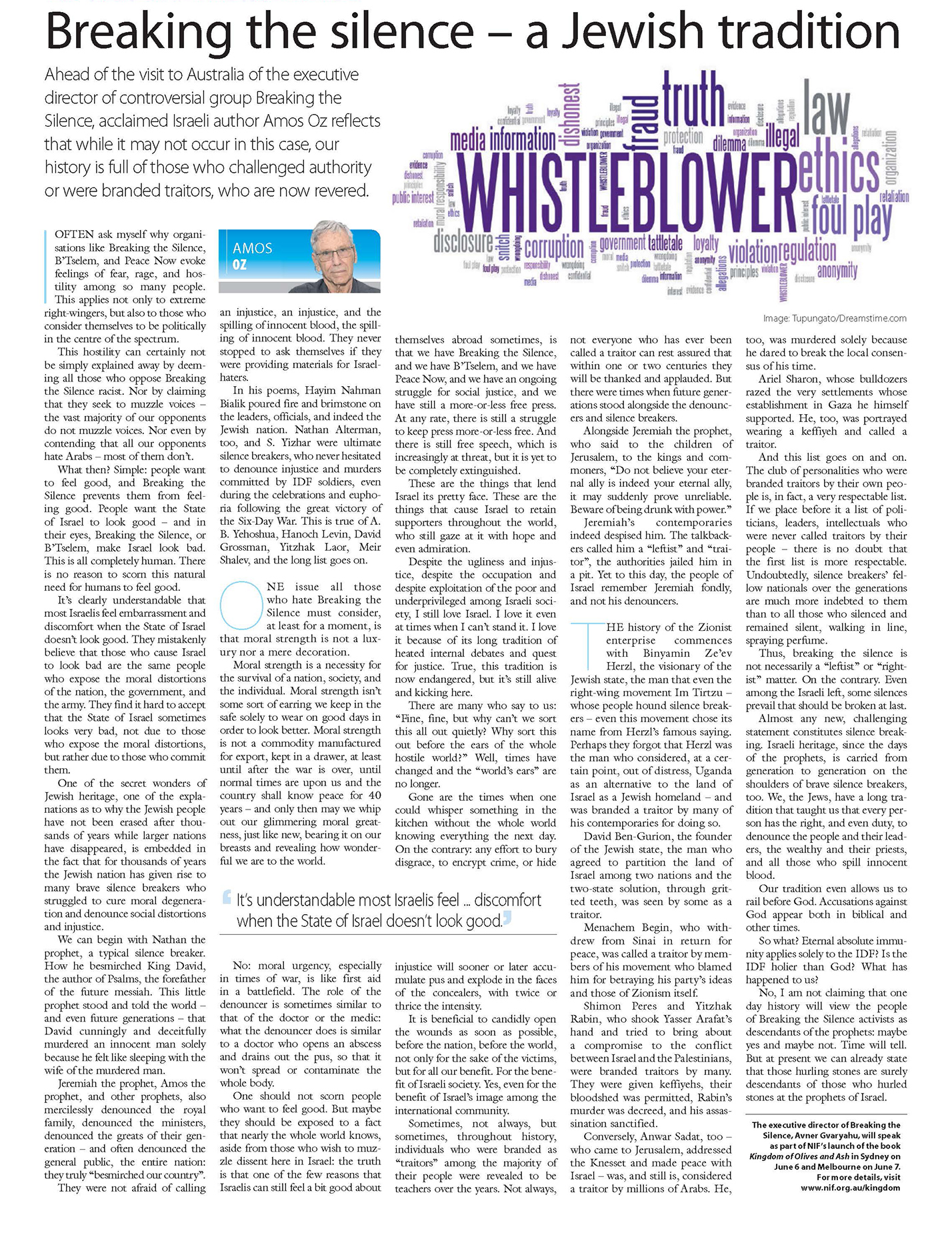 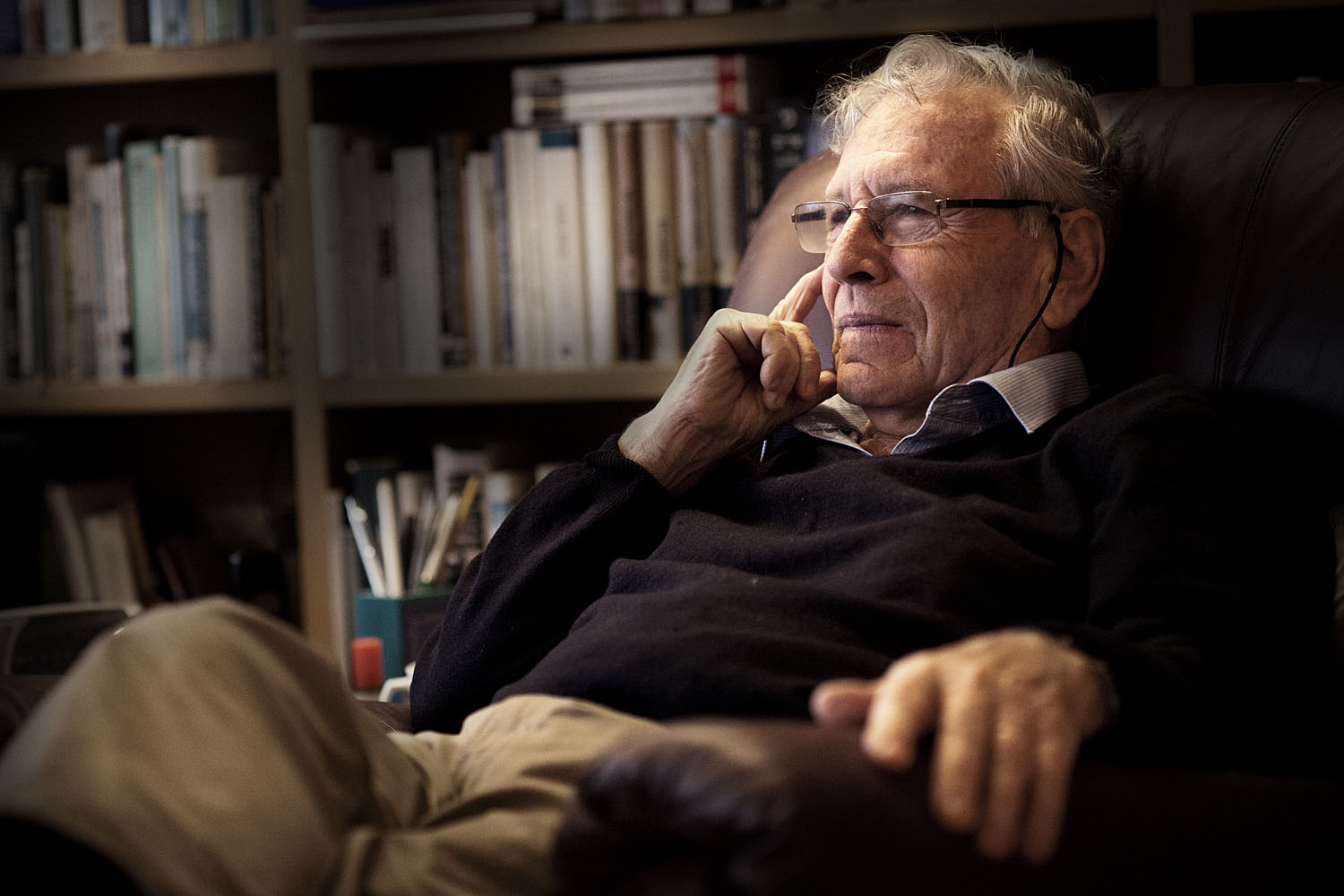 I OFTEN ask myself why organisations like Breaking the Silence, B’Tselem, and Peace Now evoke feelings of fear, rage, and hostility among so many people. This applies not only to extreme right-wingers, but also to those who consider themselves to be politically in the centre of the spectrum.

This hostility can certainly not be simply explained away by deeming all those who oppose Breaking the Silence racist. Nor by claiming that they seek to muzzle voices – the vast majority of our opponents do not muzzle voices. Nor even by contending that all our opponents hate Arabs – most of them don’t.

It’s clearly understandable that most Israelis feel embarrassment and discomfort when the State of Israel doesn’t look good. They mistakenly believe that those who cause Israel to look bad are the same people who expose the moral distortions of the nation, the government, and the army. They find it hard to accept that the State of Israel sometimes looks very bad, not due to those who expose the moral distortions, but rather due to those who commit them.

One of the secret wonders of Jewish heritage, one of the explanations as to why the Jewish people have not been erased after thousands of years while larger nations have disappeared, is embedded in the fact that for thousands of years the Jewish nation has given rise to many brave silence breakers who struggled to cure moral degeneration and denounce social distortions and injustice.

We can begin with Nathan the prophet, a typical silence breaker. How he besmirched King David, the author of Psalms, the forefather of the future messiah. This little prophet stood and told the world – and even future generations – that David cunningly and deceitfully murdered an innocent man solely because he felt like sleeping with the wife of the murdered man.

In his poems, Hayim Nahman Bialik poured fire and brimstone on the leaders, officials, and indeed the Jewish nation. Nathan Alterman, too, and S. Yizhar were ultimate silence breakers, who never hesitated to denounce injustice and murders committed by IDF soldiers, even during the celebrations and euphoria following the great victory of the Six-Day War. This is true of A. B. Yehoshua, Hanoch Levin, David Grossman, Yitzhak Laor, Meir Shalev, and the long list goes on.

ONE issue all those who hate Breaking the Silence must consider, at least for a moment, is that moral strength is not a luxury nor a mere decoration.

Moral strength is a necessity for the survival of a nation, society, and the individual. Moral strength isn’t some sort of earring we keep in the safe solely to wear on good days in order to look better. Moral strength is not a commodity manufactured for export, kept in a drawer, at least until after the war is over, until normal times are upon us and the country shall know peace for 40 years – and only then may we whip out our glimmering moral greatness, just like new, bearing it on our breasts and revealing how wonderful we are to the world.

No: moral urgency, especially in times of war, is like first aid in a battlefield. The role of the denouncer is sometimes similar to that of the doctor or the medic: what the denouncer does is similar to a doctor who opens an abscess and drains out the pus, so that it won’t spread or contaminate the whole body.

One should not scorn people who want to feel good. But maybe they should be exposed to a fact that nearly the whole world knows, aside from those who wish to muzzle dissent here in Israel: the truth is that one of the few reasons that Israelis can still feel a bit good about themselves abroad sometimes, is that we have Breaking the Silence, and we have B’Tselem, and we have Peace Now, and we have an ongoing struggle for social justice, and we have still a more-or-less free press. At any rate, there is still a struggle to keep press more-or-less free. And there is still free speech, which is increasingly at threat, but it is yet to be completely extinguished.

Despite the ugliness and injustice, despite the occupation and despite exploitation of the poor and underprivileged among Israeli society, I still love Israel. I love it even at times when I can’t stand it. I love it because of its long tradition of heated internal debates and quest for justice. True, this tradition is now endangered, but it’s still alive and kicking here.

There are many who say to us: “Fine, fine, but why can’t we sort this all out quietly? Why sort this out before the ears of the whole hostile world?” Well, times have changed and the “world’s ears” are no longer.

Gone are the times when one could whisper something in the kitchen without the whole world knowing everything the next day. On the contrary: any effort to bury disgrace, to encrypt crime, or hide injustice will sooner or later accumulate pus and explode in the faces of the concealers, with twice or thrice the intensity.

Sometimes, not always, but sometimes, throughout history, individuals who were branded as “traitors” among the majority of their people were revealed to be teachers over the years. Not always, not everyone who has ever been called a traitor can rest assured that within one or two centuries they will be thanked and applauded. But there were times when future generations stood alongside the denouncers and silence breakers.

Alongside Jeremiah the prophet, who said to the children of Jerusalem, to the kings and commoners, “Do not believe your eternal ally is indeed your eternal ally, it may suddenly prove unreliable. Beware of being drunk with power.”

Jeremiah’s contemporaries indeed despised him. The talkbackers called him a “leftist” and “traitor”, the authorities jailed him in a pit. Yet to this day, the people of Israel remember Jeremiah fondly, and not his denouncers.

THE history of the Zionist enterprise commences with Binyamin Ze’ev Herzl, the visionary of the Jewish state, the man that even the right-wing movement Im Tirtzu – whose people hound silence breakers – even this movement chose its name from Herzl’s famous saying. Perhaps they forgot that Herzl was the man who considered, at a certain point, out of distress, Uganda as an alternative to the land of Israel as a Jewish homeland – and was branded a traitor by many of his contemporaries for doing so.

David Ben-Gurion, the founder of the Jewish state, the man who agreed to partition the land of Israel among two nations and the two-state solution, through gritted teeth, was seen by some as a traitor.

Menachem Begin, who withdrew from Sinai in return for peace, was called a traitor by members of his movement who blamed him for betraying his party’s ideas and those of Zionism itself.

Shimon Peres and Yitzhak Rabin, who shook Yasser Arafat’s hand and tried to bring about a compromise to the conflict between Israel and the Palestinians, were branded traitors by many. They were given keffiyehs, their bloodshed was permitted, Rabin’s murder was decreed, and his assassination sanctified.

Conversely, Anwar Sadat, too – who came to Jerusalem, addressed the Knesset and made peace with Israel – was, and still is, considered a traitor by millions of Arabs. He, too, was murdered solely because he dared to break the local consensus of his time.

Ariel Sharon, whose bulldozers razed the very settlements whose establishment in Gaza he himself supported. He, too, was portrayed wearing a keffiyeh and called a traitor.

And this list goes on and on. The club of personalities who were branded traitors by their own people is, in fact, a very respectable list. If we place before it a list of politicians, leaders, intellectuals who were never called traitors by their people – there is no doubt that the first list is more respectable. Undoubtedly, silence breakers’ fellow nationals over the generations are much more indebted to them than to all those who silenced and remained silent, walking in line, spraying perfume.

Thus, breaking the silence is not necessarily a “leftist” or “rightist” matter. On the contrary. Even among the Israeli left, some silences prevail that should be broken at last.

Almost any new, challenging statement constitutes silence breaking. Israeli heritage, since the days of the prophets, is carried from generation to generation on the shoulders of brave silence breakers, too. We, the Jews, have a long tradition that taught us that every person has the right, and even duty, to denounce the people and their leaders, the wealthy and their priests, and all those who spill innocent blood.

Our tradition even allows us to rail before God. Accusations against God appear both in biblical and other times.

So what? Eternal absolute immunity applies solely to the IDF? Is the IDF holier than God? What has happened to us?

No, I am not claiming that one day history will view the people of Breaking the Silence activists as descendants of the prophets: maybe yes and maybe not. Time will tell. But at present we can already state that those hurling stones are surely descendants of those who hurled stones at the prophets of Israel.