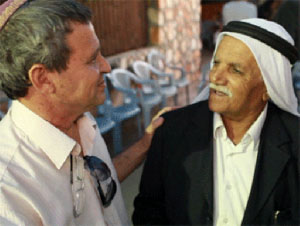 The current war between Israel and Hamas, and the dramatic and tragic events leading up to it, have further polarised the Jewish and Arab communities within Israel. Extremist right-wing advocates have become more emboldened and are fanning the flames of incitement – on social networks, in the streets and in the Knesset.

We are witnessing concrete attempts to hurt Arab citizens within Israel, and give them a feeling they don't belong. Even before the current war, the fragility of Jewish-Arab relations in Israel has been highlighted by the rising tide of anti-Arab rhetoric and exclusionary politics, and the ongoing legislative efforts to curtail the rights of Arab citizens.

It is times like these that reinforce NIF's commitment to strengthening Israel as a democracy and as a shared society that values all of its citizens. It is vital during this time of great stress and trauma to empower and support people-to-people efforts to reduce the tensions, minimise incitement and foster collaboration and mutual respect.

As the raw emotions coming out of the conflict in Gaza threaten to tear apart the fragile coexistence between Jews and Arabs in Israel, the work of the Light Tag Forum takes on a new urgency. Together, we must look towards what kind of society Israel will have the morning after the fighting stops.

Supporting Light Tag promotes a shared and compassionate society -- an Israel in which Jews and Arabs view each other not as threats, but as equals, and where all Israelis have a stake in a shared future.

Formed four years ago with NIF support, and guided by NIF's Public Advocacy program and Shatil, the Light Tag Forum is a coalition of Jewish organisations from across the religious spectrum who came together to counter the exponential rise in hate crimes by disseminating messages of compassion, solidarity and tolerance.

Light Tag has mobilised increasing numbers of Israelis as more groups have joined the Coalition over the past year. Now comprised of 44 organisations (up from 26 last year), Light Tag has become the main Jewish voice against hate crimes, racism and incitement.

Even before the current war, the number of hate crimes had shot up in recent months, with Jewish extremists connected to settler groups reportedly behind so-called “price tag” attacks against Arabs (both Muslim and Christian), left wing activists and on some occasions, IDF soldiers. Moreover, the attacks moved from the West Bank to within Israel, particularly in northern Israel. Light Tag focuses its work on public activities, legal and advocacy efforts, and educational initiatives.

Mobilising Israelis to Speak Out 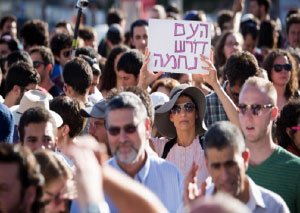 Tag Meir responds within 24-48 hours of a hate crime by organising solidarity visits to the victims, and demonstrations that create a high-visibility Jewish contingent opposed to racism, incitement and violence. The following are a few select examples of Light Tag's public activities: 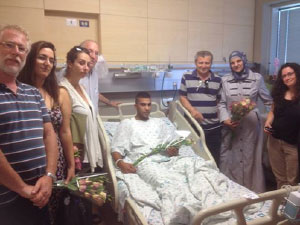 These are only a few of the dozens of public activities organised by Light Tag, which is now increasingly receiving media mentions, both in the Israeli press and internationally, especially in advance of the Pope's visit to Israel this May. In partnership with NIF and Shatil, Light Tag is also increasing its exposure by utilising social media in its public campaigns.

In response to the public outcry generated by Light Tag, the government is beginning to take action to curb racism and incitement. This includes a decision to place security cameras at 40 sites that are holy to non-Jews, declaring “price tag” activities as “unlawful associations,” and allowing the General Security Service and police to expand the tools they use to investigate such attacks.

Further, Justice Minister Tzipi Livni is slated to propose a bill to establish an external committee that will oversee hearings for state-funded rabbis accused of disciplinary infractions. The new tribunal, if established, will also forge legal guidelines for offenses, including incitement, racist comments, and unlawful political activity.

Despite some important steps taken by the authorities, the state is still not displaying a sufficiently united front or ensuring effective investigations, trials and punishment. Most of the perpetrators have not been charged, and the attacks are occurring more frequently. In the face of the ease with which hate crimes are committed, and the considerable backing perpetrators get explicitly or implicitly from senior right-wing figures, certain rabbis and the settler leadership – the government must take tougher and more effective measures.

In the coming year, Light Tag's Advocacy Working Group will work with MKs and Knesset committees to promote legislative initiatives against racism and to block racist bills. NIF supporters in Israel and around the world are also rallying to the cause.

NIF recently garnered signatures from over 1000 rabbis and supporters in North America demanding government action and declaring that hate crime violence is a threat to the moral fibre of Israel, to its Jewish and democratic character, and to the security of its citizens. 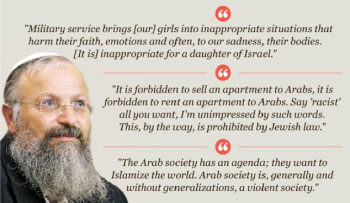 Light Tag, in partnership with Shatil and NIF's Public Advocacy Program, launched a successful campaign against the candidacy of Rabbi Shmuel Eliyahu as Chief Sephardic Rabbi. In his current position as Chief Rabbi of Tzfat, Rabbi Eliyahu has made numerous inflammatory statements, leading to acts of physical violence against Arab citizens in the city.

Light Tag's lobbying and legal advocacy member organisations also filed a petition with the High Court of Justice against the Attorney General’s decision not to file a criminal indictment against the authors of The King's Torah and the Yitzhar rabbis who wrote approbations for the book which incites to violence. In response, the High Court issued a decree nisi requiring the Attorney General to explain his conduct on this matter.

Over the past year, Tag Meir established a positive working relationship with educational authorities that recognise the need to develop and implement anti-racism curriculum. In September 2013, Tag Meir presented their report on "price tag" attacks in 2009-2013 as well as on the educational steps that must be taken against racism, at two sessions of the Knesset Committee on Education. Minister of Education Shay Piron expressed interested in working with Tag Meir in developing an anti-racism curriculum for high school students, but this work has halted due to lack of funding.

Tag Meir is leading efforts, with Shatil’s coordination and assistance, to achieve long-term progress in developing and implementing a comprehensive anti-racism curriculum in the school system. Over the next three years, the Education Working Group intends to implement a three-part program. In the first year the education group will focus on the following activities:

The main focus of work will be to develop a curriculum, using an online platform encompassing educators from over twenty institutions, of programs and materials that will be used in teaching pluralism and tolerance through religious Jewish lenses. Over 15 organisations are expected to partner and collaborate in developing and disseminating the anti racism educational materials.

The online platform built for the project will allow for an exchange of anti racist materials, pedagogy and case-based practices between educators in schools, youth movements, Yeshivot and pre-army preparatory academies. This in turn should reach approximately 6,000 youth ages 12-18. More than 100 congregations in Israel will be exposed to materials created by Tag Meir. An infrastructure for educational programming will be created which will lead to a sustained increase in anti-racism educational content in the school system with an emphasis on the religious community

A key partner is Matach, which specialises in curriculum development and has produced many of the standard textbooks currently used in the Israeli school system. Another partner is veteran NIF grantee Yod Bet B'Heshvan, a moderate Orthodox organisation that has established alternative religious schools, youth movements, and programs, which emphasise moderation and tolerance. Yod Bet B'heshvan is leading a project, currently operating in ten schools, to introduce Arabic language and cultural education into the religious school system. Other partners will include Givat Haviva, which runs educational programs promoting shared society; the Coalition against Racism, of which Shatil and Tag Meir are members, which publishes an annual report on racism, and Sikkuy, which advocates for Jewish-Arab equality. Additional partnerships will be created among Light Tag organisations that engage in education

Tag Meir's Education Group will lobby the Education Ministry to prioritise and assign funding for educational programs against racism. A conference, with 100-150 in the Education Ministry decision makers expected in attendance, along with anti-racism activists and educators will be held in the first year of the initiative. The conference will highlight to participants the need for an anti-racism curriculum in the school system, and will bring together organisations, academics, and activists working in the field.

In its second year, Tag Meir and Matach educators will train 50-70 teachers currently employed in educational institutions. These teachers are employed in middle and high schools, about a third of which are religious schools.

In the third year Tag Meir will work with local partners to establish anti-racism squads in schools that will respond actively to hate crimes. These youth squads will engage students in acting upon the values taught in the curriculum and will also serve to complement and enrich Tag Meir's broader public activities.