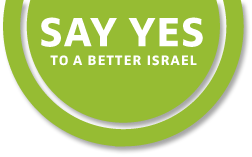 1. To pursue the vision Israel’s founders stated in the Declaration of Independence, of a Jewish state that ensures “complete equality of social and political rights to all its inhabitants irrespective of religion, race or sex”.

3. To help protect civil and human rights in Israel.

4. To encourage recognition of the diversity of Israeli society as a valuable asset.

5. To promote innovative models of a Shared Society, with a focus on Israel's mixed cities such as Jaffa,  Acre,  Haifa and Ramle/Lod.

6. To achieve fair and equal treatment of all minorities in Israel as the test of a true democracy.

7. To strengthen marginalised and disempowered sections of Israeli society.

8. To help eliminate all forms of racism in Israel.

9. To kick racism out of Israeli soccer.

10.To continue the New Israel Fund’s work over more than three decades to build civil society in Israel.

11. To work in coalition for economic and social justice

12. To keep the Israeli social protest movement alive, now the tents are gone.

13. To rectify the inequity of Israel's economy in which a few families hold most of the wealth, many people now cannot afford housing, and one in three children live below the poverty line.

14. To raise awareness of the disturbingly large number of children and older adults who suffer from food insecurity in Israel.

15. To campaign for fairer distribution of culture budgets to reflect minorities' cultures.

16. To enable disadvantaged children of immigrants to fulfill their scholastic potential and integrate into Israeli society.

17. To ensure that Mizrahi girls receive as good an education as all other Israelis.

18. To educate a cadre of young Mizrahi leaders in the peripheral towns and regions.

19. To support artists working to promote and rehabilitate Israeli culture and art with an emphasis on Mizrahi culture.

21. To oppose segregation of Ethiopian-Israeli schoolchildren in kindergartens and schools.

23. To help ensure preschool education is mandatory in Arab communities.

24. To advance affordable housing solutions in cities throughout Israel.

25. To campaign for dignified, affordable housing for young couples in periphery towns.

26. To promote equal access to health care for all Israelis, with a focus on the neglected health care system in the Negev.

27. To promote more public transportation for today and tomorrow.

28. To promote micro business opportunities, cottage industries and other forms of local sustainable economic development, for disadvantaged groups in the Negev.

29. To prevent any religious group imposing its beliefs and views on other Israelis.

30. To preserve public spaces and facilities in Israel for free use by Israelis of any gender and any form of religious belief or none.

31. To promote equal recognition of all streams of Jewish religious practice.

32. To campaign for freedom of choice in marriage for all Israelis.

33. To help non-Orthodox Israelis marry at home, instead of in Cyprus or other foreign places, where they have to go currently to avoid the control of the Orthodox rabbinate.

34. To defend women who wish to pray and sing and hold the Torah at the ultra- Orthodox controlled Kotel.

35. To oppose gender segregated queues for entry to the Kotel.

36. To oppose gender segregation on buses or other public transport in Israel.

37. To oppose the ongoing campaign to eliminate women from public advertisements in Jerusalem.

38. To help make Jerusalem a more viable and equitable city for professionals and for families.

39. To assist Orthodox Jews who are combatting racism and xenophobia within sections of Orthodox Judaism.

42. To disseminate a gender equality curriculum developed for religious schools.

43. To support the struggle for labor rights of Haredi schoolteachers

45. To campaign for freedom of divorce for Israelis.

46. To promote solutions for agunot and women denied a religious divorce.

47. To support efforts to impose sanctions on recalcitrant husbands who refuse to give their wives a divorce.

48. To promote prenuptial agreements that protect women from extortion.

49. To support a progressive Jewish congregation established and led by immigrants in Ashdod.

50. To aid non-Orthodox Jews, who comprise 70% of Israel's population but receive only a tiny proportion of state spending on religious and cultural education.

52. To support the Israeli government’s stated aim to eliminate decades of discrimination against Arab citizens of Israel.

53. To promote just allocation of land by land authorities in Israel, without regard for religion or ethnicity.

54. To assist protection by the Israeli courts of the rights of Arab citizens of Israel.

55. To aid half the Bedouin population in the Negev who live in unrecognised villages with no running water, no roads and no schools.

57. To support Jewish-Arab efforts to achieve equal recognition of the rights of Arab and Jewish residents in the Galilee.

58. To oppose incitement and "price tag" actions against Palestinians and Arab citizens of Israel such as uprooting of olive trees and desecration of mosques and cemeteries.

59. To democratise the election process in Arab localities by working to reduce clan power and influence.

60. To encourage models of volunteering for the community in Arab localities.

61. To promote a culture-sensitive educational curriculum for the Israeli Arab minority.

62. To build and deepen relationships of trust and respect between Arab and Jewish Israelis.

63. To ensure rights of  African and other refugees without citizenship, by raising public awareness and supporting advocacy and legal assistance.

64. To assist development and recognition of the rights of Lesbian, Gay, Bisexual, and Transgender minorities.

65. To provide a safe and anonymous space for empowering gay Palestinian women.

66. To empower people with disabilities to achieve their rights and to promote greater accessibility and more progressive legislation that can help them integrate into the workforce.

Effects of the occupation

67. To support former senior officers in the Israeli Defense Force, Mossad and Shin Bet who advocate an end to occupation of the occupied territories to secure Israel’s future.

68. To raise awareness of the moral dilemmas faced by soldiers serving in the occupied territories.

69. To document cases of ill treatment of prisoners or torture during interrogation in contravention of Israeli law.

70. To discourage violations of Palestinians' human rights in the territories through assisting monitoring by Israelis of IDF checkpoints.

71. To raise awareness of the costs of the occupation and its domestic effects on Israeli society.

72. To promote democratic values among immigrants from the Former Soviet Union (FSU).

73. To support a cultural club for alienated young FSU immigrants.

75. To combat violence among youth, particularly among Ethiopian and FSU immigrants, and among Arab youth.

77. To work with parliamentarians and others to oppose anti-democratic bills in the Knesset.

78. To support watchdog organisations that publicise vital data about public opinion on matters of religion and state.

79. To ensure the implementation of existing freedom of information legislation.

80. To encourage grassroots reporting of social issues from progressive viewpoints.

81. To support Social TV, an independent internet based media initiative, to raise public awareness of social and political issues.

82. To strengthen Israel's cadre of civil rights lawyers through scholarships for two lawyers each year in a joint program run by the New Israel Fund and American University's Washington College of Law, including internships in leading US civil rights organisations.

84. To help protect the legal rights of peaceful protesters in Israel.

85. To support human rights education programmes in Israeli schools and youth movements, including a special programme to teach human rights through the arts.

86. To help protect the rights of Israeli women.

87. To achieve equal opportunity and treatment for women in the IDF.

88. To continue support for the Rape Crisis Centre network, first funded by NIF more than 20 years ago.

89. To support the first battered women’s shelter for Arab women.

90. To promote the status and rights of Arab women through raising awareness of liberated traditions and interpretations of Islamic religious practice.

91. To encourage Arab women to higher education to benefit themselves and their families.

92. To support women's efforts to combat domestic violence in the Ethiopian-Israeli community.

97. To protect public health in the Haifa Bay by monitoring air pollution and working to enforce regulations on industries.

99. To promote cooperation between Israelis, Jordanians and Palestinians to protect shared resources of water and air.

100. To show that Diaspora Jews care deeply about the wellbeing and future of Israel.