Last Monday night, more than 300 people attended a talk by Ambassador Martin Indyk for the New Israel Fund, addressing the topic, “The Israeli-Palestinian Peace Process – From Inside the Negotiating Room.” 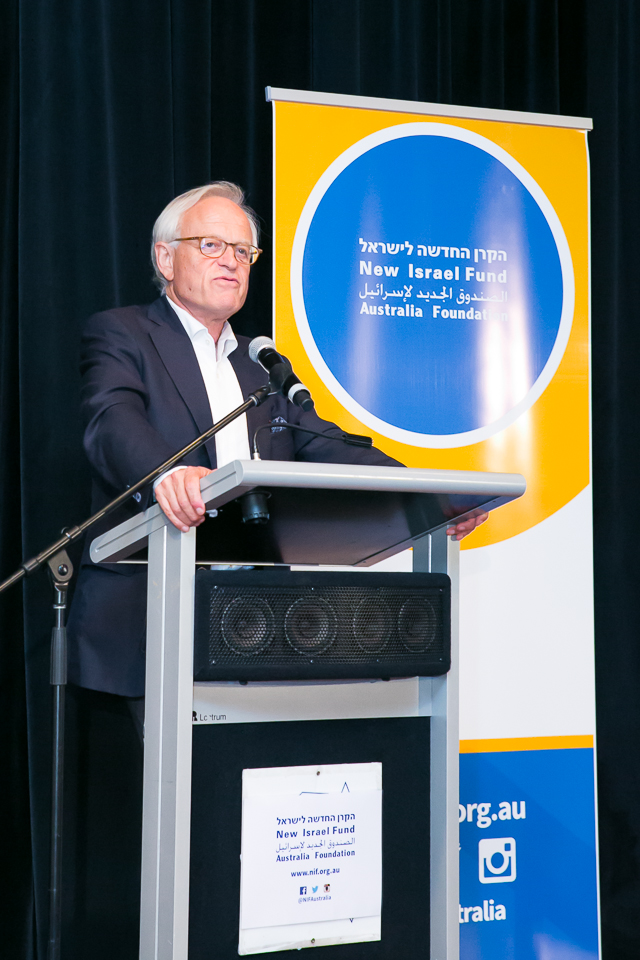 For 35 years Indyk has worked to further peace between Israel and its Arab neighbours, most recently as US Special Envoy for Israeli-Palestinian Negotiations, twice as US Ambassador to Israel, as US Assistant Secretary of State, and in roles for AIPAC, and as founder of the Washington Institute for Near East Policy.

Indyk, NIF Australia’s co-patron with OzHarvest CEO Ronni Kahn, reflected on why the breakdown in negotiations occurred, citing the undermining of the process by a number of Israeli government ministers, the continuing expansion of Israeli settlements in the West Bank, the weakness of the Palestinian Authority, and division between the West Bank and Gaza.

However, Indyk’s overarching message was the need for Israel to continue to pursue peace, despite the lack of progress made in the most recent series of talks with the Palestinians.

“Even if it can’t be done because the Arab side is feckless and useless and divided and weak and lacks legitimacy and doesn’t have [the Arab world’s] support, and it can’t be done for those reasons, you’ve got to be caught trying.”

Indyk also spoke about the numerous concessions both the Israeli and Palestinian negotiating teams have made as part of a drive towards a final status agreement:

Additionally, Israelis have shown great flexibility on their starting negotiating positions, including a readiness:

Indyk also spoke about the positive role the New Israel Fund plays in Israeli society: “The New Israel Fund is a really important organisation. We all recognise and identify with Israel as a Jewish and democratic state. Indeed, in my view you can’t have one without the other.

“The NIF through funding and through training NGOs in these various communities – whether it’s Orthodox women seeking divorces, or whether it’s Ethiopian Jews seeking equal rights or Arabs or Bedouins in Israel, in each case the New Israel Fund is there training and funding them to be able to advocate on their own behalf and to thereby strengthen Israeli democracy.”

Liam Getreu, Executive Director of the New Israel Fund in Australia, said the event was a remarkable success.

“It was an honour for NIF to host Martin Indyk – someone who grew up in our community and has gone on to achieve such incredible things.

“To have 300 people hear from a man who has been inside the negotiating room about the importance of Israel continuing to strive for peace and to learn about the New Israel Fund’s role in promoting a culture of tolerance and democracy was very special.”