This op-ed was published by Graham Kaplan and Bec Sharp, two of our 2017-18 Naomi Chazan Fellows, in the 13 October edition of the Australian Jewish News. 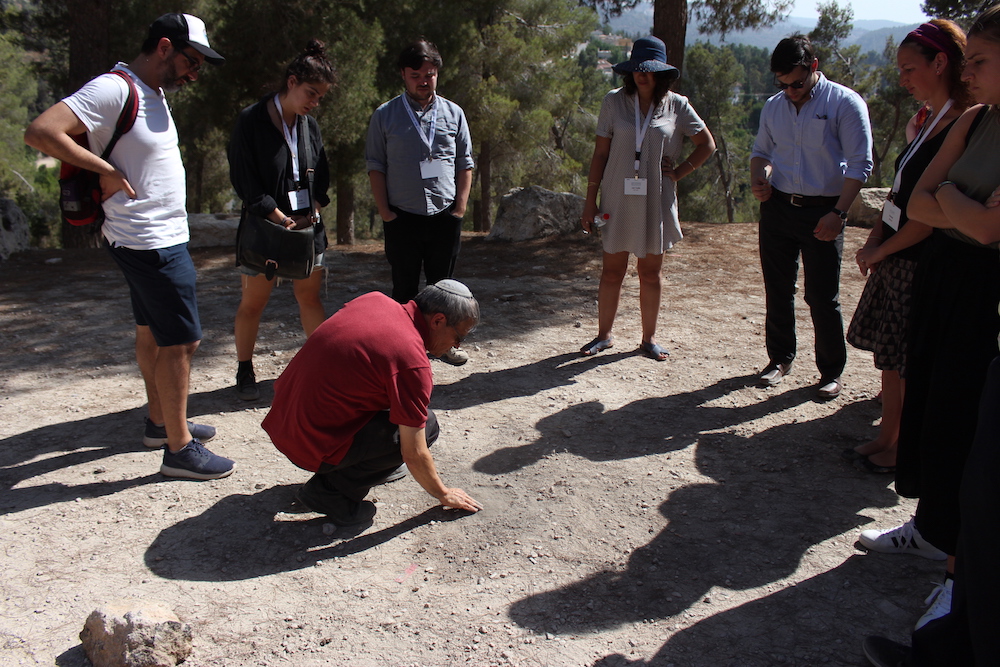 We recently had the privilege to participate in the New Israel Fund’s Naomi Chazan Fellowship tour of Israel.

Five young Australians met up with fellow participants from the UK and USA to learn more about Israeli society and the struggles which are being fought there. We met with a broad range of activists, mostly Israeli but also some Palestinians. From an Australian perspective our goal is to broaden the conversation about Israel in our local community.

Heading to Israel, we were conflicted between our social justice values, our Jewish connection to the biblical land and the policies of the current government.

Having the opportunity to meet first-hand with Israelis and Palestinians striving to achieve both social justice and a lasting peace showed us that not only were our personal conflicts completely normal, but also that positive change and progress are possible from within. Seeing the entrepreneurial Israeli spirit encapsulated on the ground was inspiring.

It was also an important reminder that we need to ensure that the funds we donate to Israel are going to institutions with which we have shared values.

This lesson was most apparent on one of the most intense days of the program in Jerusalem. During our time in the holy city, there had been a fatal attack on two border policemen at the Al Aqsa Mosque, and much of the Old City was in complete lockdown as tensions were rising.

Amid the tensions, we had a confronting day with Tag Meir founder Gadi Gvaryahu. Tag Meir was founded in 2011 to respond to the increasing number of violent “Price Tag” attacks by right wing extremists. His organisation strives to support and empower people-to-people efforts to reduce tensions, minimise incitement and foster collaboration and mutual respect, particularly between Jewish and Palestinian citizens of Israel.

Their work crosses religious, social and ethnic divides, ending discrimination and speaking out against violence. After Shira Banki, a young Jerusalemite, was stabbed to death by an Ultra-Orthodox Jew protesting an LGBT pride march, Tag Meir organised a city-wide vigil.

In 2014, after the brutal kidnapping and murder of three Israeli teenagers, the Tag Meir rally called for people to “mourn, not avenge.” Tag Meir organised some 350 people to make a condolence visit to the Abu Khdeir family, whose teenage son was burned alive by Jewish extremists just a few days later.

Their commitment to non-violence and the methodical, matter of fact way they go about it is something to behold.

Having experienced so much conflict and pain over thousands of years, it seems like each corner of Jerusalem you explore has a different story to tell. Few places around the world are as full of memorials and recognition of trauma as Israel.

In the Ultra-Orthodox neighbourhood of Har Nof, we saw the site where Palestinian terrorists stormed a synagogue killing four worshippers and a responding security guard in 2014. To see such destruction wrought in a holy site was deeply saddening.

But it was the juxtaposition of the Har Nof memorial and the barren trees of the Jerusalem Forest, just past Yad Vashem, where teenager Mohammed Abu Khdeir was burnt alive by Jewish extremists, that had a profound impact on us. The only memorial in this place was the blackened ground where his body was burnt. As we kicked away dirt to find the ashened site, the enormity of the task faced by Tag Meir really hit home, as well as the broader hope that things must be better than this.

This fight – for diversity, pluralism, acceptance and tolerance – is central to Israel’s future success. The country has always been a global Jewish project, one in which the Diaspora has played a crucial role.

Young Jews, in particular, are key to this process. As our Generations X and Y become more universal in their political and social outlook we need to see these values represented in Israeli society.

NIF’s Fellowship – with young adults from across the Jewish world – plays an important role. No longer are coalitions to support Israel forged across local neighbourhoods; now they’re built on social media networks and video chats.The richness and diversity of views in Jewish communities around the world is something we really look forward to emulating in Australia.

As Jewish MP and Shadow Attorney-General Mark Dreyfus recently said on ABC’s Q&A program, dissenting voices in a democracy are critical because even when we disagree they enrich our community and our lives.

Going on this trip was a real privilege and impossible to distil in just a few words. Seeing all the tireless work that grassroots organisations such as Tag Meir are doing to create tolerance and diversity in Israeli society, allowed both of us to strengthen our connection to the country and the Jewish values of Tikkun Olam. Being able to experience this with a cohort of young international activists made the experience one we will cherish forever.

Graham Kaplan from Sydney and Bec Sharp from Melbourne are NIF Naomi Chazan fellows. You can download the original PDF here.