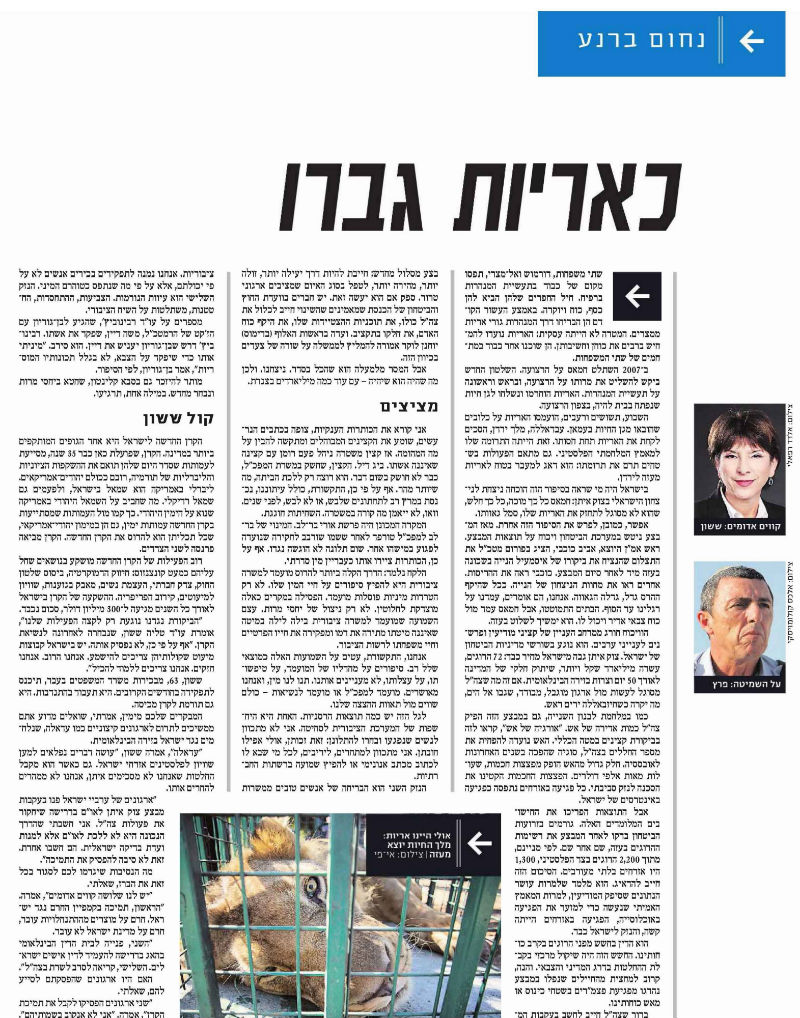 We've reproduced below an English translation of the article.

The New Israel Fund is one of the most under-attack organisations in the country. NIF has been working for 35 years, helping NGOs whose agenda fit with the liberal Zionist outlook of its donors, most of them US Jews. Liberal in the US is left in Israel and sometimes even radical left and what the US Jewish left is fond of is detested by the Jewish right. NGOs on the right, also funded by US Jews, and whose only purpose is to destroy NIF, have risen up against the NGOs assisted by NIF. NIF brings a livelihood to both sides.

Most of NIF's activities are invested in subjects where there is almost a consensus: strengthening democracy, consolidating the rule of law, social justice, empowerment for women, combating racism, equality for minorities, and bring the periphery closer to the rest of Israel. NIF's investment over the years has reached $300 million - a tidy sum.

"The criticism against us only touches on one aspect of our activities," says Adv. Talia Sasson who was recently chosen as NIF's President. "All the same we won't stop them. There are minority groups in Israel whose voices must be heard. We are the majority. We are strong. We must learn to be inclusive."

Sasson, 63, a former senior official at the Ministry of Justice, will assume her new role in the coming months. She will work on a voluntary basis. She also donates from her own pocket to NIF.

Your critics on the right, I said, ask why you continue to contribute to extremist organizations like Adalah, which fights against Israel in the international arena.

"Adalah," said Sasson, "does wonderful things for the equality of Palestinian Israel citizens. Even when it takes a decision that we don't agree with we are in no rush to boycott them."

"Arab Israeli organizations approached the UN after Operation Protective Edge demanding that IDF actions be investigated. I think that the right way is not to go to the UN but to appoint an Israeli committee of enquiry. They thought otherwise. That's no reason to stop support."

What circumstances would cause you despite that to stop funding them, I asked.

"We have three red lines,' she said, "The first is supporting the boycott campaign against Israel. Boycotting goods from the settlements is within limits but boycotting Israel is outside the limits."

"The second is to petition the International Court of Justice in the Hague to put Israeli individuals on trial. The third is a call to refuse to serve in the IDF."

Are there organizations that you have stopped supporting, I asked.

Do you see yourself as a Zionist organization, I said. In effect you support anti-Zionist NGOs.

That's masochism, I said. You are feeding the mouth that spits on you.

"I don't agree with that," Sasson said, "Human rights organizations are critical bodies by their nature. I prefer that there will be criticism and that things will get changed."

Do you think like they do that Israel is an apartheid state, I asked.

"Apartheid is a different place and a different situation," she said, "What we are is sufficient."

"We are speaking after a three month wave of terrible racism. Arab human rights activities told me: once we were scared of the police; today we are scared of people in the street. An Arab woman was thrown off the train simply because she was an Arab. Think about our people – what did we think of those who stood up against us and abused our people like that."

Racism, I said, also exists in Arab organizations. There are those among them who are ready to take money from Jews, but boycott Jews.

Sasson sighs, "Sometimes it's hard," she said, "But we are the majority."

The donations by Israelis to NIF hardly reach NIS 1 million annually. Why don't Israelis donate to you, I asked.

"There is not a culture of donations," she said. "When you meet Americans they explain that the donation is part of their Jewish commitment. Here that doesn't work."

Talia Sasson worked for the State Attorney's offices for 25 years. She handled some explosive cases but the most explosive case of all she handled after she retired. In July 2004, the head of Prime Minister Ariel Sharon's bureau approached her to compile a report about the illegal hilltop settlements in the West Bank. The relationship between Sharon, father of the settlers, and Sasson, an attorney who has fought against them, was one of the strangest we ever knew. Why did he choose you, I asked.

"He was very smart," she said, "That was his way of coping with the pressure from the US Administration."

"Today it's a different story. Sharon thought that it was forbidden to argue with the US President. Netanyahu thinks that he can permit himself to do so."