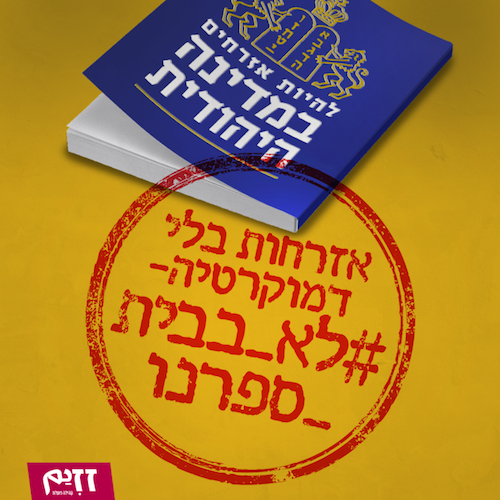 Year 12 students from across Israel have launched a petition against the new book, Being Citizens in Israel, which they argue focuses more on the Jewish aspects of Israel than its democratic aspects. More than 1,400 students have signed the petition so far. It reads:

“According to experts who read drafts of the textbook, it presents Israel as a Jewish state, period, and pushes the values of democracy to the margins. The principle of the rule of the majority has turned into the tyranny of the majority, and the differences between a citizen and a subject have become blurred. And if that is not enough, the writers are also rewriting reality and ignoring the existence of a Palestinian minority in Israel.”

The new edition will replace the existing one that dates back to 2000, and will be one of three approved textbooks approved for Israeli schools on the subject. It will also be the only textbook on the subject to be translated into Arabic.

One of the leaders of the protest, Anouk Savir Kadmon, said: “As high school seniors, we are learning about democracy and we are learning that one of the duties of citizens in every democratic country is to be involved and to protest. It cannot be that in history class last year we learn about the Palestinian refugee problem that was created in the wake of the War of Independence, and then the new (civics) textbook has no mention of it.”

Outrageously, when the students attempted to deliver the petition to the Education Ministry last week, they were barred from entering the building.

But the campaign is not over. Other groups protesting the book include the Civics Teachers Council, the Academic Forum for Civics Instruction, the Israel Political Science Association, and Israeli-Arab heads of education departments.