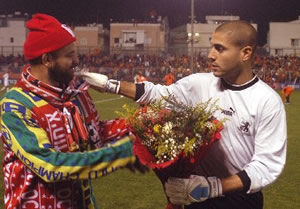 The New Israel Fund’s “Kick Racism Out of Football” campaign is celebrating a decade of enormous success this year.

In events organised by the campaign, dozens of Arab and Jewish fans met before the opening match of Israel's new soccer season to prepare anti-racism banners, and the fans of Hapoel Tel Aviv and from the Arab city of Sakhnin also discussed the need for shared society and tolerance.

Until just a few years ago, it was common to hear chanting such as, “Death to Arabs,” monkey noises directed at black players and insults hurled at the Prophet Mohammed. The program, which uses soccer as a tool to reduce racism and increase cross-cultural dialogue in Israel, has helped establish civil fines for incitement to racist violence and publicises the rates of racist sports incidents in local and international media.

Through the program, NIF-trained volunteer observers collect data on violent or racist remarks directed at players and other fans due to their religious, racial or national origins, and on incidents of physical violence. The data is published in a weekly Index in leading newspapers and sports Internet sites. During the 2006-2007 season, the Israel Football Association began fining clubs for the racist behaviour of the fans, with their disciplinary committees using reports from NIF observers as evidence.

Believing that racism in the soccer stadium mirrors racist attitudes in society at large, NIF modelled the program on the successful U.K. campaign, “Let’s Kick Racism out of Football.” In partnership with the Israel Football Association and the English Football Association, the action mobilizes fans and players to promote a more sportsmanlike atmosphere on and around the soccer field.

Statistics further attest to the program’s impact – a 2007 survey found that 60% of Israelis feel that the authorities should be doing much more to eliminate the racist and violent behaviour of soccer fans, and 37% of Israelis would attend matches if there was less racism and violence in the stadiums.