Israel’s refugee policy ‘an affront to our history and values’

The following op-ed was written by NIF Australia Vice-President Steven Glass and published in the Australian Jewish News on Wednesday 14 February 2018. 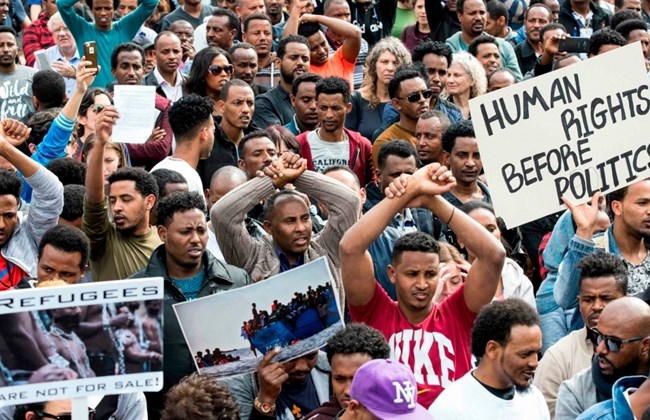 On May 13, 1939, just a few months after Kristallnacht, a ship departed Hamburg carrying 937 Jews fleeing the Holocaust.

Most held visas to enter the US. The SS St Louis arrived at Havana two weeks later, where the passengers were expecting to disembark and await the finalisation of their immigration formalities for the US.

But the Cuban government would not permit them to land. Requests to President Roosevelt to expedite their entry into the US went unanswered.

On June 6, 1939, the SS St Louis was forced to depart Cuba. It sailed back to Europe, where 254 of its passengers perished at the hands of the Nazis.

It was in response to this and other incidents that the United Nations resolved, at its first session in 1946, that no refugees should be forced to return to their country of origin.

In 1951, the UN Convention on Refugees was adopted. It has since been signed by 145 countries, including Israel, one of the earliest signatories.

It offered protection for those fearing persecution in their country of origin. It was initially available only to those who had fled the atrocities in Europe prior to 1951 – ie, mainly Jews – but was later extended to everyone fleeing persecution anywhere.

The Convention has sometimes been referred to as “the world’s apology to the Jewish people,” though of course it applies nowadays to everyone.
Or does it?

There are currently around 38,000 people seeking asylum in Israel, mainly from Sudan and Eritrea. Some have submitted applications to be recognised as refugees under the UN Convention, but few applications have even been considered and only a small number accepted.

After years of cycling these asylum seekers in and out of Manus-style detention in Holot, the Israeli government has now announced that they are to be forcibly deported to unsafe countries.

Some of those who have been sent back have suffered rape, torture and human trafficking. In some cases, they have ended up back in Sudan – the very country from which they fled for their lives. Chilling shades of the SS St Louis in 1939.

Seeking refuge from persecution is deeply ingrained in our history, in our culture, and in our religion.

Virtually all of the religious celebrations and commemorations in the Jewish calendar – whether those originating from ancient times, like Pesach and Shavuot, or more contemporary occasions like Yom HaShoah and Yom Ha’atzmaut – either recall dark moments of suffering in our history, or celebrate our forebears’ flight to liberty.

Alongside these are many other instances of persecution, in every corner of the globe and at every moment in our history, from confinement to ghettos, to inquisitions, to blood libels, to pogroms, that do not have a commemorative day.

Seeking freedom from persecution is a defining and profoundly Jewish experience. It is an experience also reflected in our religious scriptures.

On no less than 36 occasions, the Torah exhorts us to welcome foreigners, because we were foreigners in Egypt and we understand their suffering.

As well as disregarding its international legal obligations, Israel’s new policy toward asylum seekers is an affront to our history and our values as Jews. This is not who we are.

It is why so many are protesting against it – from lawyers, to rabbis, to El Al pilots who have refused to carry asylum seekers away from Israel.

Here in Australia, the country with the highest number per capita of Holocaust survivors except Israel – people are insisting on being heard.

An emergency appeal launched by the New Israel Fund Australia raised $20,000 within just one week to help fund lawyers and case workers in Israel who are assisting asylum seekers facing deportation.

And, in just two days, 200 people signed a letter to PM Netanyahu protesting against his asylum seeker policies.

NIF plans to send the letter to Mark Sofer, Israel’s ambassador to Australia, next week.

We know better than this. Please join us and call upon the Israeli government to treat its refugees with the compassion that Jewish people, our parents and our ancestors, have sought at times of grave danger for more than 2,000 years.

STEVEN GLASS is vice president of New Israel Fund Australia and a board member of the Asylum Seeker Centre of NSW.