Changing the language from rationalisation to responsibility - by Barbara Swirski

This article by Adva Center (The Study of Israeli Society and for Social Justice and Equality) executive director Barbara Swirski was published in NIF's Ha'aretz Yom Kippur supplement, and was read by tens of thousands of Israelis. 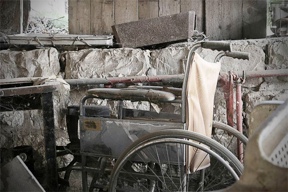 Now that the government has spent three decades striving to downsize, following the neo-liberal model, perhaps the time has come to transition from the language of rationalization to that of responsibility. Downsizing means budget cuts, privatization, and exchanging worker-employer relations for consumer-product relations. Responsibility, by contrast, means ensuring adequate funding for social services; reversing the privatization trend; and a return to worker-employer relations, so that Israel continues to be a welfare state rather than one promoting the wellbeing and profit of labor contractors.

How can we bring about the change? Here are two examples: retirement savings plans  and healthcare.

We need security for policyholders instead of for the insurance companies. Now that the "new pension funds" have been privatized, government responsibility is limited to regulation:  the Treasury determines, inter alia, the pension calculation formula, the investment rules of the pension funds, and maximum management fees that the companies are permitted to charge. This is the backdrop for the Treasury's announcement in early August, to the effect that it plans to change the pension calculation formula as of 2014. As a result, future pensioners will be drawing a pension that is 10% lower than today. The Treasury's reason: pension funds had a lower yield than expected in recent years.

The Treasury neglected to mention another instrument it has at its disposal to deal with the low yield: lowering management fees policyholders are charged. Cutting management fees in half would add more than 10% to pension benefits. Why wasn't this step considered? Because, instead of ensuring benefits for future pensioners, the government prefers to ensure the profitability of the pension funds run by insurance companies, whose profits come from high management fees. The government considers itself responsible for competition among the companies, so it allows high management fees, claiming that the small companies depend on them for survival. Yet it fails to assume responsibility for employees paying in to the funds in order to insure that they have an income after retirement.

Moreover, if the government had really considered itself responsible for us all, not only for the insurance companies, it would insure the retirement savings that became mandatory in 2008 by assuring a yield of 4% plus the cost of living index (both before and after retirement). That is, the government would promise to subsidize the retirement funds during the bad spells. Other countries do it.

And we haven't even mentioned yet that low-income workers, who do not have a steady work history, have no chance whatsoever of accruing reasonable retirement benefits, given current high management fees. In order to ensure that they too will be able to draw an adequate pension, it is necessary to establish a system of subsidized insurance for low-income workers, with zero management fees, the money invested in special government bonds with an assured yield. The National Insurance Institute of Israel could administer such a fund.

We need to stop downsizing the public healthcare system by denying health services to the general public. The government, in the name of economic rationalization, is encouraging two developments that threaten to destroy public healthcare in Israel:

Genuine state responsibility demands putting an immediate stop to privatization trends and finding appropriate solutions within the public healthcare system to ensure equality for all. The funds that are currently being invested in private insurance add-ons and private surgery could be used for bettering Israel's public healthcare system for the good of us all, instead of being used only for a privileged minority.

The following steps are sorely needed In order to move from ostensible rationalization to actual responsibility: a decision to reduce the management fees of retirement savings funds and provide guarantees for savings, and the adoption of creative measures to keep healthcare revenues within the public health system.

Barbara Swirski is executive director of the Adva Center research institute, for the Study of Israeli Society and for Social Justice and Equality. Translated from the Hebrew by Sara Friedman