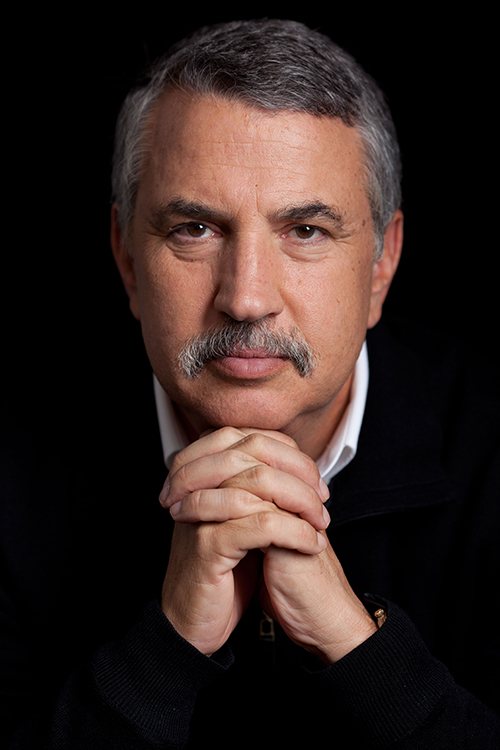 Thomas L. Friedman is an internationally renowned author, reporter, and columnist. He is the recipient of three Pulitzer Prizes –two for international reporting from the Middle East and a third for his columns written about 9/11.

He is the author of seven New York Times bestsellers —

From Beirut to Jerusalem, The Lexus and the Olive Tree, Longitudes and Attitudes, The World Is Flat, Hot Flat and Crowded, That Used To Be Us (with Michael Mandelbaum) and, most recently, Thank You For Being Late. Friedman was born in Minneapolis, Minnesota, on July 20, 1953, and grew up in the middle-class Minneapolis suburb of St. Louis Park.

It was a visit to Israel with his parents during Christmas vacation in 1968–69 that stirred his interest in the Middle East, and it was his high school journalism teacher, Hattie Steinberg, who inspired in him a love of reporting and newspapers.

Friedman earned his BA from Brandeis in 1975 and was awarded a Marshall Scholarship by the British government and earned an M.Phil in Modern Middle East Studies from St. Antony’s College, Oxford. He started his journalism career with UPI on London’s legendary Fleet Street in 1978. After serving as a Beirut reporter for UPI for two years he was hired by the New York Times in 1981, where he served as the Beirut bureau chief, Jerusalem bureau chief, chief diplomatic correspondent, international economics correspondent and, since 1995, its foreign affairs columnist.