Difference and indifference - by Anat Hoffman

This article by Anat Hoffman was published in NIF's Ha'aretz Yom Kippur supplement, and was read by tens of thousands of Israelis. 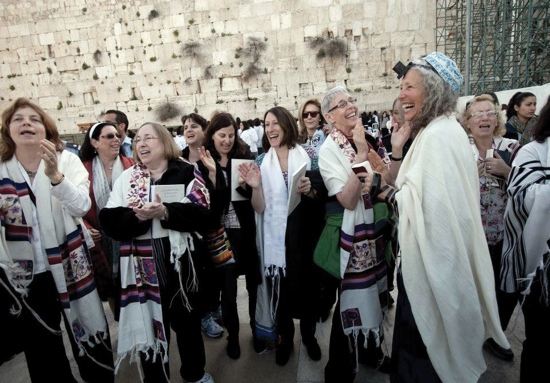 Fellow Israelis, let me tell you how it came to pass. We were indifferent, and allowed an extreme minority within Judaism to build partitions amongst us. A partition is not necessarily bad; it's fine, as long as it furthers empowerment and solidarity; as long as she who is behind it enjoys equality amid difference, not if she is excluded and silenced by sheer force.

You need to know how to construct a partition. Take for example the mother of all Israeli partitions: the mehitza separating men from women at the Western Wall. That barrier now rises above human height, requiring grannies to climb up on plastic chairs to glimpse their grandson having his Bar Mitzvah. Over the years, the partition was moved, in order to expand the men's section at the expense of the women's; the men's section is now five times larger than the women's section.

Once it started moving, the partition acquired a life of its own. With the support of state funded rabbis, the barrier moved on to buses and army barracks, tearing us apart. Anxious rabbis erect barriers to quash change. They are concerned by the revolution in women's status at home and in society; they worry that the demand for equality will infiltrate their own society too.  Separating men and women in the street, on buses, and at public events enables control and monitoring. Any girl who fears that her hair, skin, voice, even a look from her eyes, might do harm and lead a man astray, will not grow up to be a women leading a revolution.  Separation is designed to ensure that modesty is observed in the public sphere. Modesty is an efficient whip for weakening women while strengthening those rabbis who determine the boundaries of modesty.

This Yom Kippur, I ask forgiveness for "the sin of indifference to barriers". I wish we could all be vaccinated against indifference to barriers, like the polio vaccine campaign in Israel now – both diseases cause paralysis. I am convinced that indifference toward those who are behind the barrier is the greatest obstacle we face to realizing all our visions in the land of our fathers and mothers. Let us hear the voice of women who are denied a divorce, the voice of gays and lesbians, the voice of Conservative and Reform communities, and that of all those people who go unheeded by the religious establishment. Judaism at its best can be a source of compassion, generosity, and solidarity, instead of the series of flaws we witnessed during the recent elections for the Chief Rabbinate.

For 25 years I have taken part in the struggle of the Women of the Wall to pray according to their custom in the women's section at the Western Wall. It is the most obstinate group I've ever seen. Every rosh chodesh, all the women show up, bright and early, at the Wall, and pray together as a group. Our services take place in unfriendly surroundings, as we face the hostile religious establishment. 25 years with no breaks or sick leave. The group's determination met with historic success this year when Judge Moshe Sobel of the Jerusalem District Court handed down one of the most important rulings on religion and state, stating that the services held by the Women of the Wall do not fall outside of Jewish custom, and should be permitted.

What is the secret of our success? We tore down barriers; first, the barriers among ourselves: our group includes Orthodox, Reform, Conservative, and unaffiliated women. We are all sisters, friends, partners; we all pray from a prayerbook whose wording is suitable for any constellation of the group. We also tore down the barrier between ourselves and Jews all over the world, both men and women. When we were arrested on charges of "holding a religious ceremony not in accordance with local custom and in a manner which is offensive to others", solidarity services were held in front of Israel's embassies and consulates all over the world.  Thousands of photos of women wrapped in prayer shawls and holding a Torah scroll were sent to the prime minister, cabinet members, and the Rabbi of the Western Wall.

On the night I spent in the Jerusalem police lockup in the Russian Compound, my cellmate, G., who was being held for solicitation for prostitution, asked me what I was there for. I tried to explain, but she simply could not understand why a Jewish woman would be cuffed at wrists and ankles for donning a prayer shawl during prayers, at the women's section at the Western Wall. G. is not alone: the Israeli and world Jewry refused to accept our arrest without protest. That's what finally ended Israeli indifference. There was a public outcry, the media woke up, women MKs joined our struggle; the IDF paratroopers who had liberated the Western Wall came to show their support, and hundreds of women expressed solidarity and joined our prayers at the Wall. Now another challenge faces our group: bringing a Torah scroll to the women's section to read from during services. There are one hundred Torah scrolls for public use at the Wall, but the rabbi in charge refuses to let us use them, and won't hear even of our donating a scroll for women's use.

Israel cannot afford to be the only democracy in the world where the government prohibits Torah reading by women. Israel must lead change in the Jewish world, not block it. However, in order to raise hope and bring about change, it is necessary to stop being indifferent to barriers and those behind them.

Rabbi Mordechai Rotem, the first Isreali Reform rabbi who studied in Israel, tells his congregation that on Yom Kippur "we tell ourselves and all those with open hearts: the Jewish fist has only one purpose – to beat upon the Jewish heart during the confession prayer on Yom Kippur. The Jewish heart is a sensitive thing."

Anat Hoffman is chairwoman of Women of the Wall and executive director of the Israeli Religious Action Center of the Reform Movement. Translated from the Hebrew by Sara Friedman