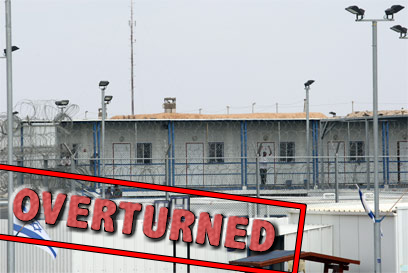 Following a petition by NIF grantees, the Israeli High Court of Justice has struck down Israel's "anti-infiltration" law, which allowed to state to detain asylum seekers for three years without processing them.

NIF grantees the Association for Civil Rights in Israel (ACRI) and the Migrant Workers Hotline were among those involved in the petition.

The Times of Israel reported that:

There are currently more than 50,000 African migrants in Israel. Some 1,750 are being held under the amendment, most of them in a detention center in southern Israel. The court ruled that each case must now be examined individually, and set a 90-day deadline for the process.

Justice Miriam Naor, deputy president of the High Court, said the ruling could be Israel’s “finest hour,” because it would force the country to find “humane solutions… that match not only international law, but also the Jewish worldview.”

The ruling will create “a difficult task” that Israel will perhaps “have to face against its will,” Justice Uzi Fogelman said, but “we must remember that those who come to our shores… are entitled to the right to liberty and the right to dignity that the Basic Law grants to any person as a human being.”

NIF’s work with refugees doesn’t end with court cases, either – grants are also given to organisations like Physicians for Human Rights, which runs regular health clinics, and Power to the Community, which is the only organization uniting refugees and South Tel Aviv residents to work jointly for better access to education, health care and other necessities. This means that NIF is working on multiple fronts towards more just and sustainable solutions for those seeking asylum in Israel.

Responses from asylum seekers in Israel (on that page is also an interview with the Hotline for Migrant Workers's lawyer, Asaf Weitzen):

Moatomis Ali (Asylum Seeker from Darfur): "This law isn't connected to the situation facing refugees in Israel. The problem is that that Israel doesn't take care of refugees. We live here without basic rights, and they don't check our story to see if we're entitled to asylum or not. I have many friends who have been jailed because of the Law. It's a good feeling for them, to be leaving jail, but they still know what will happen to them once they get out. I was also freed but it's illegal for me to work and they call me an infiltrator, a work migrant and a criminal."

Davit Demoz (Asylum Seeker from Eritrea): "I'm happy that the law has been cancelled; it's not logical to put people in jail for more than a year without a release date. These people went through difficult experiences in their countries and on the way to Israel. But, when they're freed and thrown out by the Tel Aviv Central Bus Station, we don't know what will happen to them. We escaped from a dictatorship in order to live a secure and free life. It's not right that the only options for refugees are to live on the streets or go to jail."

With the Law's main clause overturned by the High Court today, we are hopeful that thousands of innocent asylum seekers will finally be freed after spending a year and a half in administrative detention. However, we also brace ourselves for a potential legislative backlash in the Knesset, where already today many have spoken both for a drive to quickly re-legislate "anti-infiltration" measures, and against the High Court's very authority to overrule such unconstitutional legislation.