Advancing the Status of Women, June 2014

In some cases, religious law, social institutions and traditions in Israel have kept girls and women at a disadvantage in schools, in the workplace, in divorce cases, and as victims of violence. Israeli women in minority groups have disproportionately high rates of unemployment, poverty, health problems and abuse of basic rights. 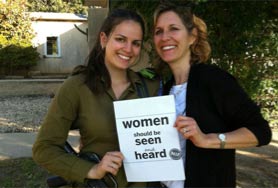 Moreover, in a worrying trend, ultra-Orthodox norms regarding gender segregation have been increasingly spilling over into the public domain, as women and girls are increasingly excluded from public spaces. At the same time, growing public awareness is now mobilising action across the political and social spectrums, engendering new organisations committed to religious freedom and women's rights, and galvanising veteran ones.

These groups, with support from NIF and Shatil, are succeeding in making change.

Merav Michaeli is a feminist and activist who began her career working for veteran NIF grantee Association of Rape Crisis Centers in Israel. In a message in honor of International Women's Day this year, Michaeli noted that she is proud to be "one of 27 women in the Knesset, the largest representation of women in the Israeli government thus far." Michaeli also noted that "NIF’s support for women’s rights is critical for our ability to create a truly just, equitable, and inclusive society."

Perhaps the most significant and unprecedented success of NIF's public campaigns was when Attorney-General Yehuda Weinstein declared in 2013 that the marginalisation of women is to be considered a criminal offense. The Shatil-led Coalition against Women's Exclusion – comprised of 30 feminist groups – has played a key role in leading this struggle, including launching a social media blitz on the issue during national elections, and producing an in-depth report on the subject with concrete recommendations that are echoed in the Attorney-General's directives.

On the heels of this success, in early 2014, Justice Minister Tzipi Livni and Minister Limor Livnat, head of the Knesset Committee on the Status of Women, gained government approval of a rule requiring all ministries to report on actions taken to prevent women's exclusion and detailed implementation plans. Concrete steps include placing inspectors on buses to ensure women's rights and safety, amendments of burial services licenses enforcing women's full access to cemeteries, and more.

Back on the Bus

Following a two-year struggle led by NIF grantee The Jerusalemite Movement, the Egged bus company, its ad agency, and the State signed an agreement in early 2014 allowing for the return of images of women in bus advertisements and for the State to pay compensation for any acts of vandalism.In 2012, The Jerusalemite Movement succeeded in its petition to the Supreme Court, which ruled that Egged could not censor women from ads on its buses. In an attempt to evade the ruling, Egged's ad agency removed all human images from its ads. These actions led to further petitions, resulting in the new agreement.

Fifty agunot – women whose husbands cannot or will not grant them a divorce – stood in the pouring rain this past March to demand that the public, the courts, and the religious authorities not abandon them. The vigil came out of Making Change Together, a training program for leadership and grassroots activism conducted by Shatil and NIF grantee Mavoi Satum.

Just prior, the Tzohar organisation had announced that all of its rabbis now require couples to sign a pre-nuptial agreement that prevent agunot and get refusals. NIF grantee International Coalition for Aguna Rights (ICAR) has also been campaigning on this issue for over ten years.

In late March, the Caucus for Female Knesset Members announced the passage of a bill in its first reading that would enable a woman to become director-general of the rabbinic courts

Women Against Violence (WAV) helped get female advisors employed in five Arab municipalities to promote women's rights. Further, thanks to a targeted training program led by a coalition of NIF grantees, an unprecedented 165 Arab women ran for office in the October 2013 municipal elections, with two female candidates heading party lists in the towns of Sakhnin and Kfar Qassem. As a result, 14 Arab women were elected to local councils, double the previous amount. NIF grantees are now running a follow-up program to mentor the new councillors and to profile women leaders in the Arabic-language media, with the aim to change attitudes in Arab society about women's leadership capabilities.

Following a petition by NIF grantees Association for Civil Rights in Israel (ACRI)and Itach: Women Lawyers for Social Justice the Supreme Court ordered the state to ensure fair representation of women and Arabs on the Israel Land Authority (ILA). The ILA controls 93% of land in Israel, and has major input into land use decisions. There is currently only one woman, the director-general of the Ministry of Justice, and no Arab-Israelis serving on the ten-member Council.

A new law passed in February 2014 will allow transferring social welfare payments to a couple's shared account instead of only to the man's account. This achievement, promoted by NIF grantee Itach, is an important first step addressing the feminisation of poverty.

The Knesset passed an amendment to the Equal Pay Law requiring public sector employers to report wages according to gender. This amendment to the 50-year-old law is "an important step towards equalising wages and recognising that we still have a long way to go – especially regarding the private sector," said Tamar Adelstein, coordinator of Shatil's Equalising Wages Project.

The change will allow better assessment, monitoring, and action against gender-based discrimination. It further emphasises the responsibility of employers to identify and address gaps. This amendment passed not long after NIF grantee Adva Center published its study on discrimination in Israel's salary structure which found that the average Israeli woman's monthly wage is only 66% of a man's.