In this edition our focus is on the violence that has once again returned to the streets of Israel. We’ve included a summary of events, together with insights and perspectives from respected journalists and authors including Ari Shavit and Roger Cohen.

As a Diaspora community we have watched this retaliatory cycle of violence and fear unfold with a sense of heartbreak. Yet, we can take hope from the organisations and individuals in Israel that are working to bring Jews and Palestinians together to work towards a long-term political solution.

Twelve Jewish and Zionist organisations in Australia from across the religious, political and social spectrum have come together to issue a statement regarding former Likud MK Moshe Feiglin’s visit to Australia this month.

“Moshe Feiglin’s views on women, homosexuality and Palestinian citizens of Israel are inconsistent with Jewish values. They have no place in a modern democracy such as Israel that was established on the principle of respecting the human rights of all its minorities.”

The following organisations have signed on to the statement:

In addition, a number of the organisations’ leaders have commented:

“The views of many people in the Australian Jewish community do not line up with Moshe Feiglin’s which is why it is important to point out when such anti-democratic values are being promoted. NIF is working hard in Israel to bring different sectors together, promote shared society and coexistence, and uphold the values of the Declaration of Independence.”

“Whilst we respect the right of different voices to be heard in our community, we are equally concerned that the impending visit of Israeli extremist, Moishe Feiglin, will bring the Jewish community into disrepute and play into the hands of our adversaries.”

“Hashomer Hatzair Australia believes Moshe Feiglin's views about minority groups in Israel are divisive and detrimental to the character of the Jewish State. Whilst he has the right to freedom of speech, we condemn his views and would like to highlight the fact that these are not the views of Australian Jewry and the larger Israeli mainstream society.”

“Moshe Feiglin's disrespect for marginalised groups in Israel goes against Netzer Australia's fundamental beliefs in equality and respect for all human life. Though he is entitled to his views, we strongly believe they are an obstacle to the pursuit of peace and democracy in Israel.”

“We are concerned about Mr Feiglin’s visit to Melbourne. He is a disruptive person in the Jewish world and shares few values with the Jewish community.”

“The board of Keshet Australia, wishes to express our concern regarding the proposed visit by Mr Feiglin to Australia. Keshet aspires to encourage and teach inclusivity. Mr Feiglin's philosophy is diametrically opposed to our core values. Mr Feiglin has expressed views which seek to oppose the inclusivity and rights of GLBT Jews. Keshet Australia believes his views are damaging and hurtful to people here and in Israel. We feel it is incumbent on us to highlight to the greater community that such views are not held or supported by most Jewish people in Australia or elsewhere.”

“ARZA Australia supports discussion about sensitive issues in Israel, including the treatment of minorities, the status of women and the issues of pluralism and sexual orientation. However, such discussions should be respectful and focussed on constructive dialogue. It is highly questionable if the views and presentation of Moshe Feiglin meet these basic criteria.”

Article in the Australian Jewish News: 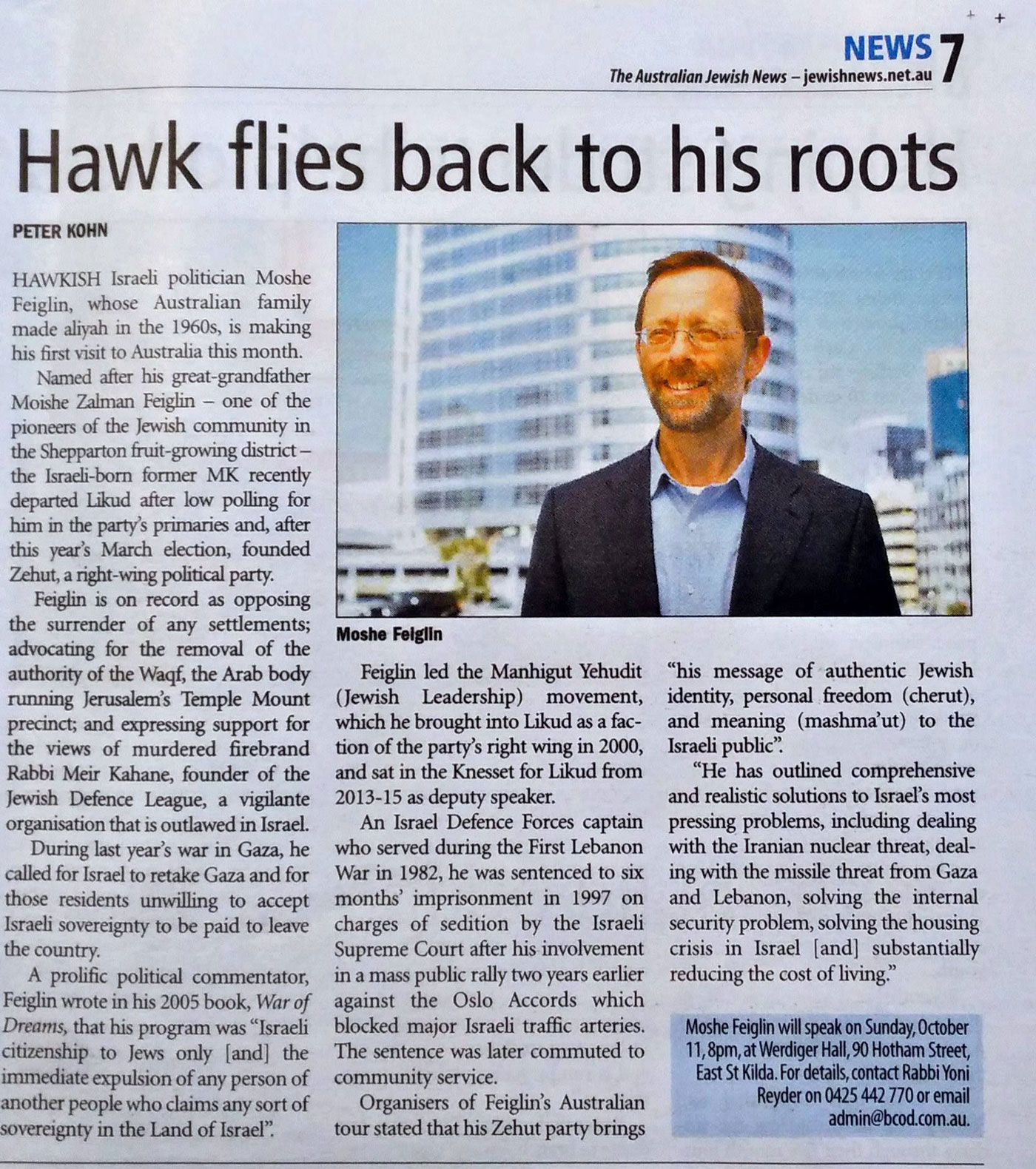 Last Monday night, more than 300 people attended a talk by Ambassador Martin Indyk for the New Israel Fund, addressing the topic, “The Israeli-Palestinian Peace Process – From Inside the Negotiating Room.”

Change in the Leadership Team at the New Israel Fund

Unfortunately, we have had to indefinitely postpone our scheduled speaking tour with New York Times columnist Roger Cohen’s scheduled trip to Australia due to an illness in his family. All of us at NIF send our best wishes to Roger and his family at this time.

The Israel Religious Action Center - IRAC - has released their latest report on gender segregation in Israel, "Exclusion, for God's Sake".

The news out of Israel is getting worse. The stabbings of six marchers in Friday’s Jerusalem Pride Parade was followed by the news that a Palestinian baby was burned to death in the West Bank -- a victim of an act of arson, apparently carried out by Jewish zealots.

Earlier this year, we launched the Naomi Chazan Fellowship, a ten month leadership development program specifically tailored for young Jewish adults to build on their knowledge of Israel, and work to create a more holistic and pluralist communal discourse around Israel.

“They say that we are anti-Zionist. It’s a mistake, we want what’s best for Israel”

In a charged conversation with NRG, the International Director of the New Israel Fund, Daniel Sokatch, rebuffs the criticism against his organization: “They say that we are anti-Zionist.  It’s a mistake, we want what’s best for Israel.”  In his opinion, part of what’s best is to show the world its ethical problems.

The Imaginary Enemies of the Government of Israel - Rachel Liel

The Palestinian attempt to remove Israel from FIFA and the warning of the CEO of Orange International about his desire to disconnect from his Israeli franchises put the movement to boycott Israel in the headlines. This was helped by belligerent statements from the Prime Minister and some of his ministers, who signalled that the boycott was a strategic threat on the state of Israel.