Israel Refocused: The shift to a diplomatic process - or not... 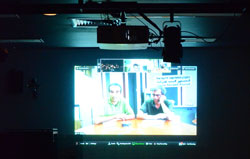 The effects of what became one of Israel’s longest wars — the loss of life, especially civilian life, destruction and hatred which has permeated both Palestinian and Israeli societies — are beginning to emerge.

We have brought together a number of articles and interviews which highlight the role that human rights organisations play in a time of war; some interesting views on possible diplomatic approaches; and some commentary about the change which will be required in Israel to address some of the major social conflicts and divisions that emerged or became more apparent during the war.

Last week, we hosted an event with three of our partners in Israel, B’Tselem, NIF and Shatil under the title, “The Gaza conflict: human rights lessons, and the day after”. You can watch video of the event on our website.

Some big news out of Israel

Some great news: here are five major developments in the areas of social and economic justice, human rights, religious pluralism, and inclusion, as a result of hard work from NIF and its grantees.

Stemming the tide of racism and incitement

Like all Jews and people of peace around the world, we are deeply relieved at the news of a ceasefire. It is crucial that the cycle of violence in Gaza does not simply recommence. Our hope is that this ceasefire marks the rebirth of negotiations towards a Palestinian state and peace. The human toll in lives lost and damaged does not allow any other outcome.

What we're doing, given the current conflict

During this terrible conflict in Gaza, we wait with hope not just for a pause to the immediate hostilities but for a permanent end to the Israeli-Palestinian conflict. We continue to mourn for the civilians and Israeli soldiers who have been killed and fear for those still in the line of fire.

The news out of Israel - current conflict

Like us, I’m sure you are hearing the news coming out of Israel with sadness.

Given the military confrontation between Israel and Hamas, which came on the heels of unprecedented incitement and tension between Jewish and Arab Israelis, the New Israel Fund stands ready to fund projects through our Emergency Grant Program

We Mourn, We Don’t Take Vengeance

Following our "Israel Refocused" newsletter yesterday, terrible news came through of a further escalation of violence. At this sad moment in the life of Israel, our thoughts have been encapsulated by this letter from NIF CEO Daniel Sokatch.

News came through early yesterday morning our time of the devastating murder of Eyal Yifrah, Naftali Fraenkel and Gil-Ad Shaar. We echo the statement issued by NIF in Israel and America:

Statement regarding murder of kidnapped teenagers

We are devastated to learn of the deaths of the three young Israeli kidnapping victims, Naftali Frankel, Gilad Shaer and Eyal Yifrah. They were murdered by extremists determined to shed innocent blood and to perpetuate conflict.

We join with their families and with everyone mourning these three young men. And we ask that every leader, Israeli and Palestinian, take every step necessary to maintain calm and prevent more loss of life. We owe it to the memories of these young men, and to the countless others who have died in this conflict, to do all we can to bring peace and reconciliation and an end to the bloodshed between our two peoples.

May their memory be a blessing.

The thoughts and hopes of the New Israel Fund Australia Foundation are with the families of the three Israeli teenagers who have been abducted. May they be returned speedily and unharmed into the arms of their loved ones.

We call on those responsible for their abduction to free them immediately. Any attack on civilians is to be deplored.

We hope that the efforts of both the Israeli and Palestinian security services meet with success and bring them home safe and sound.

May those responsible be brought to justice. We express our deepest concern that this terrible episode ends without further violence and harm to civilians, be they Israeli or Palestinian.