Preserving the bond between Zionism and human rights

This op-ed, written by two of our Naomi Chazan Fellows, Chantal Tanner and Jeremy Etkind, appeared in the February 12th edition of the Australian Jewish News. 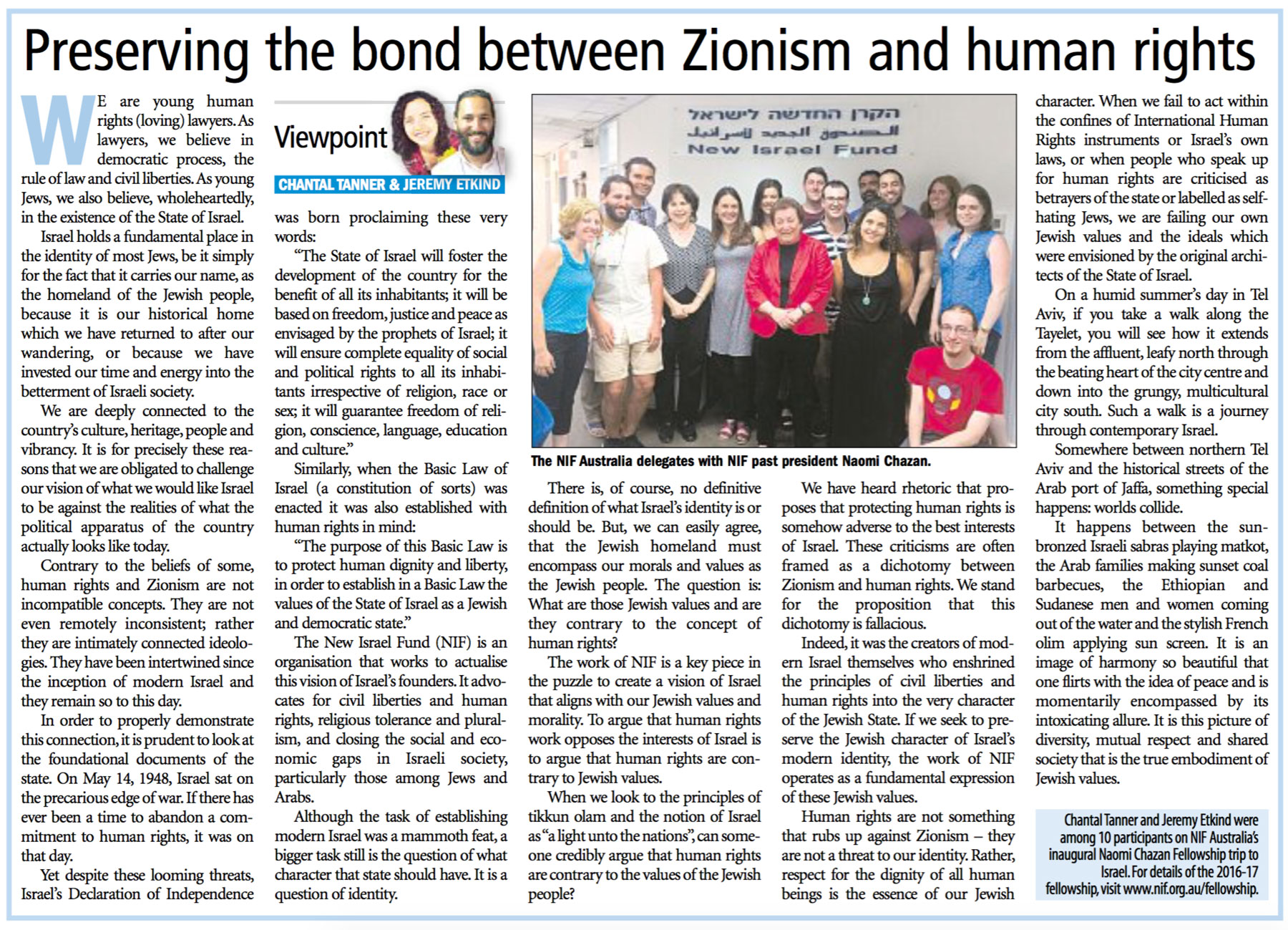 We are young human rights (loving) lawyers. As lawyers, we believe in democratic process, the rule of law and civil liberties. As young Jews, we also believe, wholeheartedly, in the existence of the State of Israel.

Israel holds a fundamental place in the identity of most Jews, be it simply for the fact that it carries our name, as the homeland of the Jewish people, because it is our historical home which we have returned to after our wandering, or because we have invested our time and energy into the betterment of Israeli society.

We are deeply connected to the country’s culture, heritage, people and vibrancy. It is for precisely these rea- sons that we are obligated to challenge our vision of what we would like Israel to be against the realities of what the political apparatus of the country actually looks like today.

Contrary to the beliefs of some, human rights and Zionism are not incompatible concepts. They are not even remotely inconsistent; rather they are intimately connected ideologies. They have been intertwined since the inception of modern Israel and they remain so to this day.

In order to properly demonstrate this connection, it is prudent to look at the foundational documents of the state. On May 14, 1948, Israel sat on the precarious edge of war. If there has ever been a time to abandon a commitment to human rights, it was on that day.

Yet despite these looming threats, Israel’s Declaration of Independence was born proclaiming these very words:

“The State of Israel will foster the development of the country for the benefit of all its inhabitants; it will be based on freedom, justice and peace as envisaged by the prophets of Israel; it will ensure complete equality of social and political rights to all its inhabitants irrespective of religion, race or sex; it will guarantee freedom of religion, conscience, language, education and culture.”

Similarly, when the Basic Law of Israel (a constitution of sorts) was enacted it was also established with human rights in mind:

“The purpose of this Basic Law is to protect human dignity and liberty, in order to establish in a Basic Law the values of the State of Israel as a Jewish and democratic state.”

The New Israel Fund (NIF) is an organisation that works to actualise this vision of Israel’s founders. It advocates for civil liberties and human rights, religious tolerance and plural- ism, and closing the social and economic gaps in Israeli society, particularly those among Jews and Arabs.

Although the task of establishing modern Israel was a mammoth feat, a bigger task still is the question of what character that state should have. It is a question of identity.

There is, of course, no definitive definition of what Israel’s identity is or should be. But, we can easily agree, that the Jewish homeland must encompass our morals and values as the Jewish people. The question is: What are those Jewish values and are they contrary to the concept of human rights?

When we look to the principles of tikkun olam and the notion of Israel as “a light unto the nations”, can someone credibly argue that human rights are contrary to the values of the Jewish people?

We have heard rhetoric that proposes that protecting human rights is somehow adverse to the best interests of Israel. These criticisms are often framed as a dichotomy between Zionism and human rights. We stand for the proposition that this dichotomy is fallacious.

Indeed, it was the creators of modern Israel themselves who enshrined the principles of civil liberties and human rights into the very character of the Jewish State. If we seek to pre- serve the Jewish character of Israel’s modern identity, the work of NIF operates as a fundamental expression of these Jewish values.

Human rights are not something that rubs up against Zionism – they are not a threat to our identity. Rather, respect for the dignity of all human beings is the essence of our Jewish character. When we fail to act within the confines of International Human Rights instruments or Israel’s own laws, or when people who speak up for human rights are criticised as betrayers of the state or labelled as self- hating Jews, we are failing our own Jewish values and the ideals which were envisioned by the original architects of the State of Israel.

On a humid summer’s day in Tel Aviv, if you take a walk along the Tayelet, you will see how it extends from the affluent, leafy north through the beating heart of the city centre and down into the grungy, multicultural city south. Such a walk is a journey through contemporary Israel.

Somewhere between northern Tel Aviv and the historical streets of the Arab port of Jaffa, something special happens: worlds collide.

It happens between the sun-bronzed Israeli sabras playing matkot, the Arab families making sunset coal barbecues, the Ethiopian and Sudanese men and women coming out of the water and the stylish French olim applying sun screen. It is an image of harmony so beautiful that one flirts with the idea of peace and is momentarily encompassed by its intoxicating allure.

It is this picture of diversity, mutual respect and shared society that is the true embodiment of Jewish values.